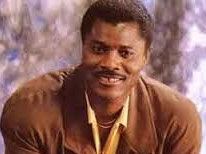 A native of Birmingham, Alabama, vocalist David Sea started out performing in his family’s gospel group. In 1970 he founded David Sea and the Question Marks, which later became the rock ’n’ roll ensemble David Sea and the Uptown Movement. His first singles, Angel (You’re the Sunshine) and Destiny, were issued by Hy-Tyde Records in 1982, and his debut LP, An Ocean Apart, appeared on the Magic City label in 1988.

Following a series of recordings on various imprints, Sea released Love Makes the World Go Round on Frederick Knight’s Park Place Records in 2006. Knight produced the album, which featured Vick Allen, Eugene and Eric Bates, Preston Glass and Carson Whitsett among the backing musicians. Sea’s powerful, wide-ranging vocals shine on songs such as the soulful title track, Glass’ Hook Up from the Heart, Whitsett’s Sure Feels Good Being With You and Tommy Tate’s One Love.

Sea is currently performing as a member of the Temptations Review featuring Dennis Edwards.