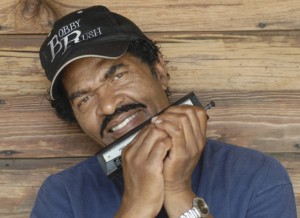 Bobby Rush calls what he does “folk-funk.” He peppers his musical fables of love, lust, infidelity and romantic mishaps with folksy aphorisms and life lessons, and then he lays them over funk-dripping rhythmic and melodic lines. His live shows, meanwhile, are legendary—trim and athletic despite his age (he turned 82 in 2015), he sparks his act with spins, leaps and other outrageous physical business as a pair of scantily clad dancing girls writhe and gyrate on either side of him. But there’s a purpose behind the pose—Rush’s routines are, at their heart, morality tales. He may romp through scenarios of erotic misadventure in which men and women alike seem primarily bent on getting whatever they can behind each other’s backs (or even in front of each other’s eyes: “She made me hold the flashlight while she made love to another man!”), but in the end, the payback always cuts his mythical miscreants down to size.

Sock Boo Ga Loo on the Chess subsidiary Checker. Finally, in 1971, he hit paydirt with the slyly double entendre Chicken Heads (b/w the equally subversive Mary Jane), on Galaxy. Chicken Heads, which remains one of his standards, hit No. 34 on the R&B charts. He followed it up with other first-rate outings (Bow-Legged Woman, Knock-Kneed Man and the faux-Creole workout Niki Hoeky, among others), all of which furthered his reputation, but none of which made the national charts. In 1979, he charted again with I Wanna Do the Do on Philadelphia International.

But the song that solidified his legend was Sue, from his 1983 album of the same name on James Bennett’s LaJam label, based in Jackson, Mississippi. The tale of a young man’s sexual coming of age at the hands (and tongue) of a kinky country girl (“She sat on the low stool, and I sat on the high stool”), it remains his trademark. Its introductory riff is instantly recognizable, and the storyline, ribald as it is, is all the more effective for its avoidance of outright salaciousness—true to his persona as a mischief-minded trickster, Rush generates more erotic heat via insinuation than a dozen X-rated rappers could with a barrage of F-bombs.

Rush recorded for several other labels over the next few years; and by 1995, he’d arrived at Malaco. He recorded three albums on the Waldoxy subsidiary—One Monkey Don’t Stop No Show (1995), Lovin’ a Big Fat Woman (1997) and Hoochie Man (2000); in 2005, he returned to the fold with Hen Pecked, issued on the 601 Music subsidiary. These discs include several songs that have become Bobby Rush standards and remain highlights of his live performances, including Hen Pecked and She’s So Fine from One Monkey Don’t Stop No Show; the title tune and Booga Bear from Lovin’ a Big Fat Woman; Garbage Man and the title tune from Hoochie Man; and Too Short, Too Little and the title tune (which Rush uses as the kick-off for one of his most elaborate and popular onstage routines with his dancing girls) from Hen Pecked.

Still one of the hardest working bluesmen in the business (at his peak, he averaged upwards of 300 gigs a year; these days, he says, he keeps it between 150 to 250), Rush remains unstoppable and apparently ageless. His appeal is multi-generational (he’s feted by hip-hop artists as an idol and role model even as his longstanding blues fans continue to idolize him); his sound remains funky and up-to-date; and his wit and lyric imagination show no signs of flagging. Bobby Rush is truly one of the living wonders of the blues world.

Portions of this bio, including the quote from Bobby Rush, are adapted from David Whiteis’ book Southern Soul-Blues (University of Illinois Press, 2013)