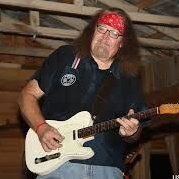 Standing 6’10” and weighing well over 300 pounds “Big” Mike Griffin is not just a baseless nickname. Born in Lawton, Oklahoma, Griffin was obsessed with music from an early age. “My dad played so there was always a guitar or fiddle laying around the house. It seems like I’ve been playing as long as I’ve been alive.”

He was attracted to the sounds of the blues he heard on the radio, and early influences include T-Bone Walker, Mike Bloomfield and Paul Butterfield. As soon as he got wheels Griffin began making the trek down into Texas to catch blues legends like Freddie King, Albert King and Albert Collins play live. By the early 1970s Griffin himself was performing in the blues clubs of southern Oklahoma and northern Texas.

While a bluesman at heart, Griffin, who had bills to pay, became equally adept at playing honky-tonk music. In the late 1970s he formed the Broken Spoke Band and eventually relocated to Nashville. In the 1980s he was hired to play guitar in country rocker David Allan Coe’s band and toured extensively with him. At the end of that gig Griffin turned his sights back toward the blues and formed his own group, Big Mike Griffin and the Unknown Blues Band. In 1992 Griffin signed with the Malaco subsidiary Waldoxy, which first released Back on the Streets Again, and then followed with Gimme What I Got Comin’ in 1993 which contained the W.C. Handy Award nominated song Fifth of Whiskey, Case of the Blues. In 1993 Griffin was also part of the band that toured behind “Malaco Europe ’93”, a traveling revue that included Little Milton, Denise LaSalle and Latimore. Griffin also contributed his guitar skills to several Malaco releases in 1994 and 1995, including Artie “Blues Boy” White’s Different Shades of Blues and James Peterson’s Don’t Let the Devil Ride. In 1995 Waldoxy took Griffin to the Muscle Shoals Sound Studios and paired him and his band with crack studio musicians Clayton Ivey, David Hood and Pat O’Connor, resulting in his final release for the label, Sittin’ Here With Nothing.

These days, Big Mike Griffin, an avid biker, is one of the top acts on the biker blues / motor music scene combining his two loves into a powerful stage act.