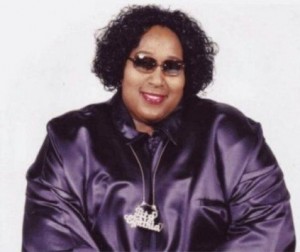 Born Cynthia Walker on October 5, 1969, vocalist Big Cynthia is a native of Houston, Texas. Music comes naturally to Cynthia—her father was Junior Walker of Motown Records fame, and her mother, Gloria, was a gospel singer. As a teenager she began performing around the Houston area, where she opened locally for touring artists such as Johnnie Taylor. In 1996 Johnny Vincent signed her to the Ace Records subsidiary Avanti and released her debut album, Baby I’m the Real Thing, in 1998.

Cynthia next joined Mel Waiters’ Brittney Records roster, traveling with him and releasing Ain’t Nothing Like a Big Woman in 2002. She wrote the majority of the songs, including the popular title track and Freaky With You. Another album, You Didn’t Take My Man, You Took My Problem, appeared on Brittney in 2004.

The following year Tony Mercedes brought Cynthia to his Tony Mercedes Records imprint, and he subsequently issued Doing It Big with Malaco Records acting as distributor. Besides serving as the album’s producer, Mercedes also penned two of its best-known cuts: If You Wanna Get It, a duet with Cynthia and TMR label mate Mr. David, and the risqué Eatin’ Ain’t Cheatin’.

Big Cynthia continues to perform and record music, and 2015 saw the release of Return of the Female Mack on her own Big Cynthia Enterprises Records. One of the album’s tracks, She Working That Nookie Thang, was featured on the first season of the hit Fox TV series Empire.